A documentary celebrating the bold women of the Womens Liberation Movement who reignited Australia’s feminist revolution.

Interweaving freshly uncovered archival footage, personal photographs, memorabilia and lively personal accounts from activists, BRAZEN HUSSIES shows us how a daring and diverse group of women joined forces to defy the status quo, demand equality and create profound social change – contributing to one of the greatest social movements of the 20th Century.

Few could have predicted that an intimate rural drama about succession and resilience would become one of the most popular French films of the past year, but its underdog status is just one of the reasons why the remarkable and heartfelt IN THE NAME OF THE LAND became such a box office phenomenon and national talking-point.

The debut feature of photojournalist Édouard Bergeon, the film is a deeply personal one, inspired by his own childhood and dedicated to his parents. It tells the story of Pierre (portrayed in a superb, career-best performance by Guillaume Canet), who returns from Wyoming to the Mayenne district of France in the late 70’s to marry his sweetheart and take over his imperious father’s farm. The couple have two children, and for many years, life is good. But the business is soon placed under enormous pressure, and what was once satisfying begins to take an insidious toll on the family.

Ten years in the making, shot on the final night of the smash hit sell out exhibition, this immersive private tour of the LEONARDO DA VINCI’s Louvre masterpieces is a unique opportunity to contemplate the painter’s most beautiful works up close. Never before have so many Leonardo da Vinci artworks been in the same place at the same time, and never has your access to their secrets and wonders been closer.

This major retrospective devoted to his entire career as a painter shows how Leonardo’s investigation of the world – the “science of painting” as he called it – was the instrument of an art whose supreme ambition was to give life to his works. The insights provided by the exhibition curators during this guided journey offer a brand new understanding of Leonardo’s unparalleled artistic practice.

This critically-acclaimed film is an extravagant feast for the senses; exploring the mouth-watering intersection between food, culture, and history.

Documenting the collaboration between world renowned chef Yotam Ottolenghi (Plenty, Simple) and the Metropolitan Museum of Art in New York, OTTOLENGHI AND THE CAKES OF VERSAILLES follows five visionary pastry makers. A veritable who’s who of the dessert world is assembled – including Dominique Ansel and Dinara Kasko – as they race against the clock to construct a decadent food gala based on the sumptuous exhibit: Visitors to Versailles.

Inspired by true events, Jan Komasa’s multi award-winning drama CORPUS CHRISTI is a remarkable tale of morality and redemption, about a charismatic young ex-convict who fooled an entire Polish village by falsely posing as a priest.

20-year-old Daniel (Bartosz Bielenia) has found God whilst incarcerated in a youth detention centre, but his criminal record excludes him from entering the seminary. At the end of his sentence he is sent to a small town to take up a position in a woodworking factory, but thanks to a stolen collar is mistakenly taken as the parish’s new clergyman. It’s a seemingly God-given opportunity for transformation, and Daniel – whilst wholly unconventional in his approach (and after a shaky start) – takes to the pulpit with a fervour and compassion that his predecessor has clearly lacked. Meanwhile, the arrival of this magnetic young preacher seems to be the spark needed for the town to acknowledge a recent tragedy that has affected the entire community, one that few have been able to speak about. But not everyone is open to his approach, and Daniel learns the hard way that following the road to salvation can also lead one astray… 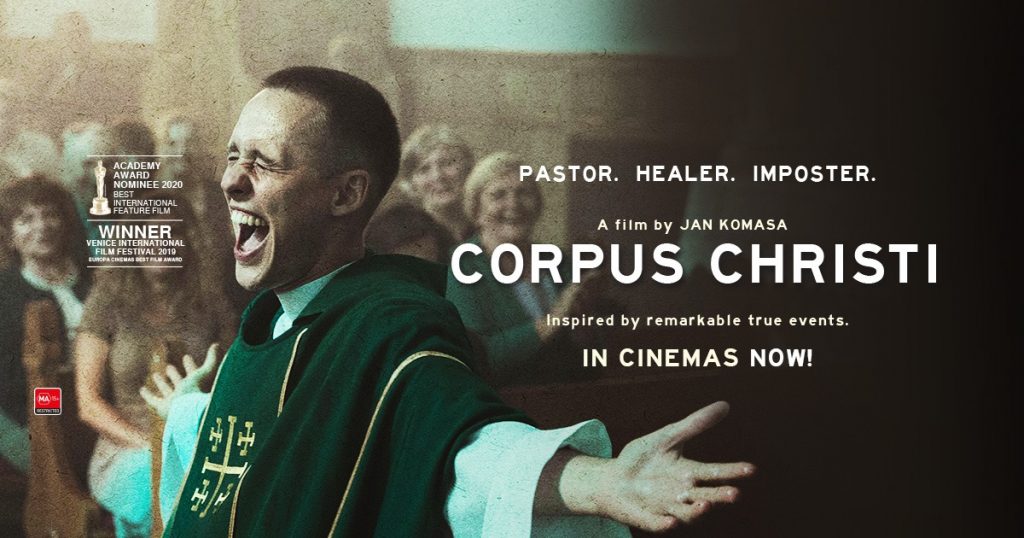