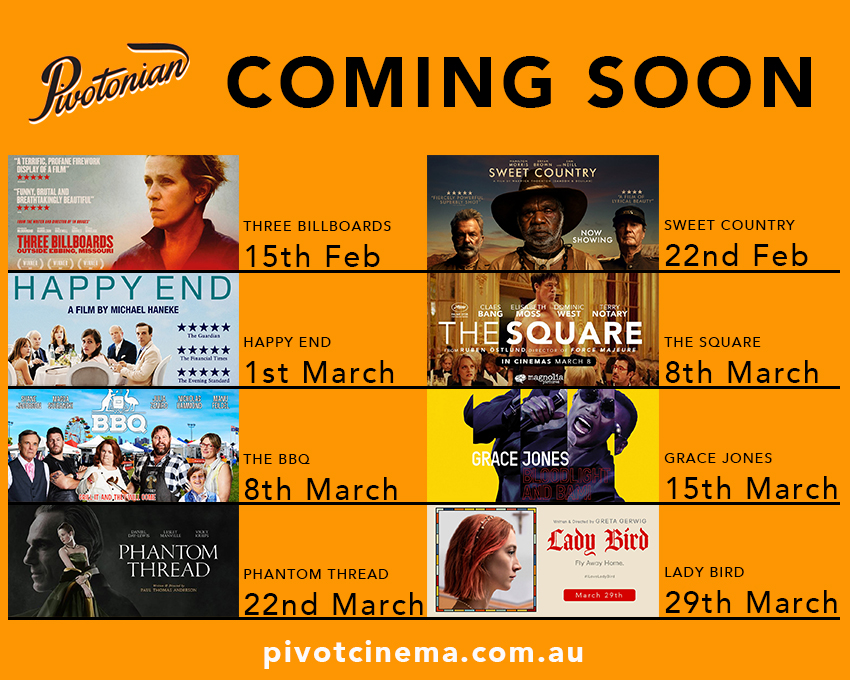 The billboards in director Martin McDonagh’s latest film are on a remote road near the home of Mildred Hayes (Frances McDormand), whose teenage daughter Angela (Kathryn Newton) was murdered seven months before the story starts. Mildred rents the billboards for a year, using them to spell out a blunt message that sets the tone for a series of confrontations between the implacable Mildred and the generally disapproving townsfolk, including the weary town sheriff (Woody Harrelson) and the slow-witted, racist sheriff’s deputy Jason Dixon (Sam Rockwell).

Set in 1929, Sweet Country could be described as a western — or at least the latest in a series of politically charged Australian period pieces that rework aspects of the genre, such as John Hillcoat’s The Proposition and Rolf de Heer’s The Tracker. Sam Kelly (Hamilton Morris) is an Indigenous man on the run with his wife Lizzie (Natassia Gorey Furber) after shooting a sadistic landowner. Pursuing the fugitives over the red sands and salt flats is a group that includes a dogged police sergeant (Bryan Brown) and a cagey tracker (Gibson John).

This is one of Austrian director Michael Haneke’s lightest films, though it touches on most of his usual gloomy themes. Along with the alienation fuelled by technology, we get another dose of the miseries of old age, embodied by Jean-Louis Trintignant. Haneke’s distaste for the hypocrisy of the bourgeoisie is an old chestnut on display, so too his repulsed fascination with pop culture. Formally Happy End is a crafty piece of work and, as ever, the director relishes the chance to get some garbage and chaos into his finicky frames.

Meet Christian, the respected curator of a prestigious contemporary art gallery. A divorced but devoted father of two, Christian drives an electric car, says all the right things, supports good causes, and is on the verge of opening his new show “The Square” – an installation which invites passers-by to examine their willingness to help others. But disaster strikes when Christian’s phone is stolen, his new performance art piece turns dangerously awry, and his marketing campaign goes viral for all the wrong reasons.  As Christian desperately tries to hold onto his own ego while his comfortable life spirals out of control, his good intentions are increasingly abandoned, with hilarious results.

Laid-back suburban everyman Darren “Dazza” Cook loves to entertain his friends and neighbours with his weekly backyard barbecues, utilizing the ancient rum-barrel barbecue that family legend prescribes as having come from Cpt James Cook’s Endeavour. Unexpectedly thrust into the limelight by his employer when an International BBQ Festival comes to town, Dazza needs to sharpen up his act, so enlists the guidance of the mysterious Scottish chef known only as “The Butcher”. As Dazza hones his chops perfecting the perfect steak, his 12-year-old son Jayden is challenged to prove the dubious Cook family ancestral link, with unexpected results.
Set in an unnamed, contemporary, multicultural, average Australian backyard, THE BBQ is a gentle comic fable about the quest for the perfect steak results.

Grace Jones: Bloodlight and Bami is an electrifying journey through the performance, private and public worlds of pop cultural icon Grace Jones. Larger than life, fierce and androgynous – Grace Jones plays all these parts. Yet here we discover her as lover, daughter, mother, sister and even grandmother, as she submits herself to our gaze and allows us to understand what constitutes her mask.

The film includes unique performances of her iconic hits Slave To The Rhythmand Pull Up To The Bumper as well as more recent autobiographical tracks, Williams’ Blood, This Is and Hurricane. These personal songs link to the film’s narrative that follows Grace on a holiday road trip across her native Jamaica. Director Sophie Fiennes creates a powerful cinematic experience, contrasting musical sequences with intimate personal footage and reaching beyond the iconic mask.

This is perhaps the greatest movie ever made about sewing. Directed by Paul Thomas Anderson and starring Daniel Day-Lewis as the designer Reynolds Woodcock, who presides over the House of Woodcock – a fictional version of a 1950s London fashion house. Reynolds is also an artist, and that’s really what the film is about, rather than fashion or design. The beautiful fabrics and the phalanx of elderly ladies who sew his exacting designs for the crowned heads of Europe are merely handmaidens to his greatness.

In Lady Bird, writer/director Greta Gerwig reveals herself to be a bold new cinematic voice with her directorial debut, excavating both the humor and pathos in the turbulent bond between a mother and her teenage daughter. Christine “Lady Bird” McPherson (Saoirse Ronan) fights against but is exactly like her wildly loving, deeply opinionated and strong-willed mom (Laurie Metcalf), a nurse working tirelessly to keep her family afloat after Lady Bird’s father (Tracy Letts) loses his job. Set in Sacramento, California in 2002, amidst a rapidly shifting American economic landscape, Lady Bird is an affecting look at the relationships that shape us, the beliefs that define us, and the unmatched beauty of a place called home.