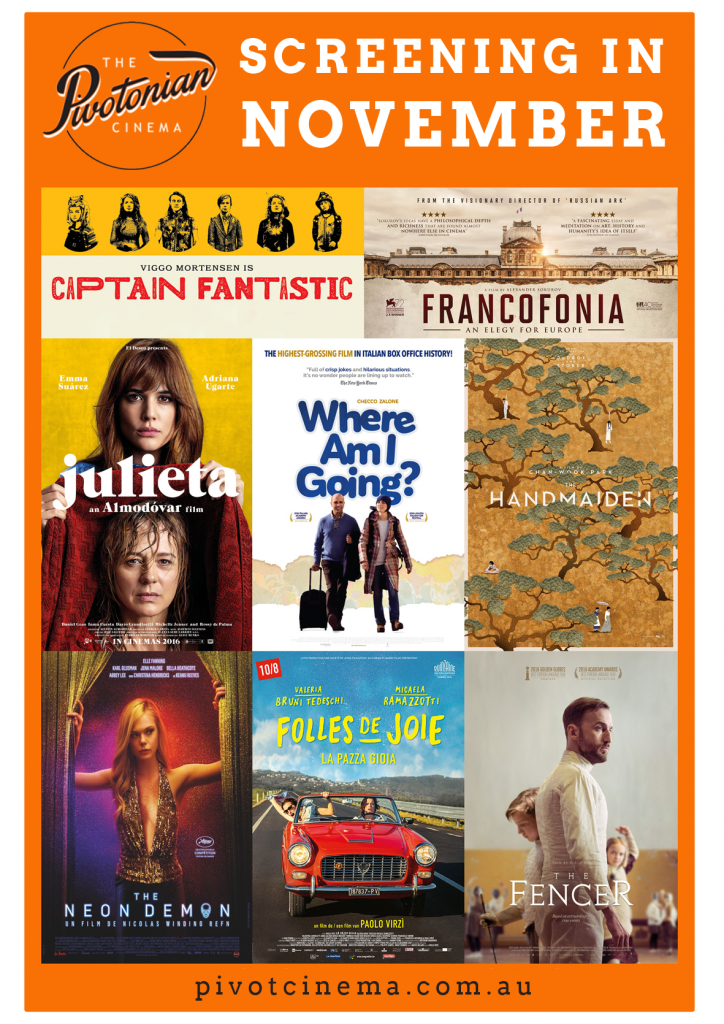 November has The Pivotonian Cinema host many of the Best Films of 2016, from some of the best directors in the business.

Pedro Almodovar’s JULIETA sees the Spanish impresario return to the heights of his previous films ALL ABOUT MY MOTHER, VOLVER and BROKEN EMBRACES. Korean director Park Chan-Wook takes a stylistic departure from the full-on likes of OLD BOY to present an English period novel, adapted to 1930s Korea in THE HANDMAIDEN. Italian up-and-comer Paolo Virzi’s LIKE CRAZY is a great contemporary drama-comedy, mirrored by the Italian comedy smash WHERE AM I GOING? -Italy’s highest grossing film ever. Also screening this month is the new visceral thriller by Nicolas Winding Refn (DRIVE) starring Elle Fanning: THE NEON DEMON, with crowd favourites CAPTAIN FANTASTIC and the remarkable FRANCOFONIA (from the director of RUSSIAN ARK) continuing into December.

Also coming up in December we have Cold War challenges in Estonia with THE FENCER, British Comedy romp GOLDEN YEARS, period drama SUNSET SONG and Ira Sachs’ much-anticipated LITTLE MEN, just in time for Christmas. For the kids, look out for YOUR NAME, the Japanese animation film that has broken all previous box office records in Japan.

And remember -we are licensed so you may enjoy a fine wine or boutique beer with your quality film at The Pivotonian.